Any large erythrocyte is described as macrocytic. If the shape is also affected this may be included in the description e.g. oval macrocyte. Morphologically, large size can be detected by comparison with a small lymphocyte: an individual erythrocyte should have size similar to the nucleus of a small lymphocyte. 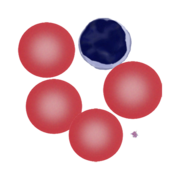 Morphologically detectable macrocytosis will generally have an underlying cause. Therefore attention is required to identify this - morphological evidence of any accompanying disease should actively be sought. Most frequently these causes are B12 or folate deficiency, myelodysplasia, or liver disease.

Where cell fragments are present in addition to macrocytes (this may occur for example in severe vitamin B12 or folate deficiency) this may reduce the overall mean cell volume (MCV) given by automated counters even when the non-fragmented cells are large, this can be a particular issue in megaloblastic anaemia. Also remember that reticulocytes may be 20-25% larger than normal red cells, so polychromatic cells should not be confused with macrocytes.

Clinical Image 1: The nucleus of the small lymphocyte provides a reference to judge erythrocyte size – this reveals that almost all the erythrocytes shown here are macrocytes. Note here that the majority have an oval shape “oval macrocytes”. An obvious exception being the truly huge polychromatic erythrocyte (upper right corner) which has a round shape. Clinical disorder: folate deficiency

Clinical Image 2: This film has a more varied cell size with some very large cells, but others of normal or small size. Nonetheless the macrocytes are highly significant. In this case the additional hypersegmented neutrophil indicates the underlying megaloblastic state – some small or even fragmented red cells can occur in severe B12 or folate deficiency reflecting fragile red cells. Clinical disorder: folate deficiency

Where cell division is impaired the maturing erythrocytes undergo fewer cycles of division and so emerge from the marrow as larger cells. We tend to associate severe macrocytosis with nutritional deficiency affecting cell division (vitamin B12 or folate deficiency); less severe macrocytosis may result from metabolic effects on cell division (e.g. hypothyroidism or occasionally chronic disease), or due to intrinsic impaired cell maturation (myelodysplasia). However, macrocytosis may also arise as a result of increased membrane lipid e.g. in liver disease (most particularly alcoholic liver disease, Zeive's Syndrome, or cirrhosis) in this case the macrocytes can be very large.